The ability of the Native and Latin American community to reclaim it's traditional health and "return to Mother Corn," the sacred grain of the Americas, has been profoundly jeopardized by a modern threat which has changed the very structure of Corn on a physical and spiritual level: genetic modification.

"A genetically engineered food is a plant or meat product that has had its DNA artificially altered in a laboratory by genes from other plants, animals, viruses, or bacteria in order to produce foreign compounds in that food. This type of genetic alteration is not found in nature and is experimental.

Example: Genetically Modified corn has been engineered in a laboratory to produce pesticides in its own tissue. GMO corn is regulated by the Environmental Protection Agency as an Insecticide, but is sold unlabeled.

GMO's have not been proven safe, and long-term health studies have not been conducted. A growing body of peer-reviewed studies has linked these foods to allergies, organ toxicity, and other health problems. These studies must be followed up. However, unlike the strict safety evaluations required for the approval of new drugs, the US Food and Drug Administration does not require safety studies for genetically engineered foods. The United Nations/World Health Organization food standards group and the American Medical Association have called for mandatory safety testing of genetically engineered foods -- a standard the U.S. fails to meet.

Various environmental problems associated with genetic engineering have been well documented, including biodiversity loss, an overall increase in pesticide use, the emergence of super weeds that are threatening millions of acres of farmland, and the unintentional contamination of non-GMO and organic crops."

As we can see from the information above, there are many significant concerns regarding the genetic modification process which is currently and irreversibly altering our ancestral staple of maize.  This permanent genetic modification of corn has profound implications for the future of the health, food sovereignty and spirituality of American peoples.  What has been for centuries a life-giving source of sustenance is fast becoming a food source with uncertain effects on health.  Currently up to 85% of U.S. corn is genetically modified.


Biotechnology companies claim that genetically modified crops are needed to help feed the world, yet these claims do not stand up to scrutiny.  A 2009 study by the Union of Concerned Scientists concluded that "experimental high-yield genetically engineered crops have not succeeded."  In fact, a U.N. study concluded that "we won't solve hunger and stop climate change with industrial farming on large plantations,"  and that "organic and sustainable small scale farming could double food production in the parts of the world where hunger is the biggest issue…"

Why then would companies like Monsanto, the American multinational agricultural biotechnology corporation, want to keep producing genetically modified crops?  The answer is that Monsanto owns patents on their genetically modified seeds, and use aggressive legal tactics to sue small farmers for patent infringement any time pollen or seeds from a farm growing GM crops drift onto their land.

This article describes Monsanto's attempt to monopolize the world's food supply.  Fields of genetically modified crops would have to be completely isolated to prevent the transfer of pollen and genes to non-GM crops, which is impossible.  There is no such thing as co-existence between organic and genetically-modified crops.  And why isn't the U.S. government doing anything to prevent this injustice?   It's called the government's "revolving door" with Monsanto. 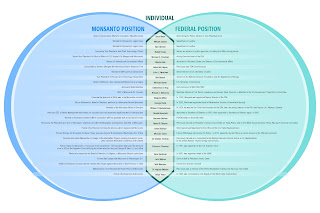 Despite Mexico's 1998 moratorium on genetically modified crops, traditional, and often ancient varieties of Mexican corn have been found to be contaminated by GMO's.  The following clip, from the documentary The Future of Food, depicts the incredible richness and diversity of corn in Mexico, which is being threatened with destruction:

While there is still controversy over whether or not GM foods pose a risk to health, the fact remains that because of genetic modification, the genetic heritage of our traditional grain is in jeopardy.  In our attempt to "return to the arms of Mother Corn," we now have corporations and government policies determining what the genetic traits of our sacred, traditional grain are to be.  Through the imminent loss of biodiversity which accompanies the profusion of industrialized, genetically modified corn, we lose the direct link with our ancestors that this living heritage of corn provides.

The following is a quote by the Tzotzil Maya people:

“We have learned that agrochemical companies patented our maize.  They are putting in genes from other living beings and many chemicals to completely put an end to our natural maize, so we’ll have to buy nothing but transgenic maize. If these agrochemical companies try to do away with our maize, it will be like putting an end to part of the culture that our Mayan ancestors bequeathed to us. Our indigenous peasant grandparents gave their labor and their hearts; they cried as they asked protection from our Creator for their work to bear fruit.” 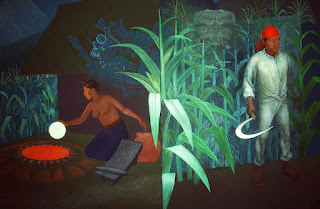 The loss of natural maize entails a loss not only of genetic resources and of cultural heritage, but the loss of a spiritual connection with the land and with the food which sustains us.  This is not only an issue facing Native people, but a universal issue which affects everyone around the world.

But there is hope.

Here in California, a grassroots movement gathered nearly one million signatures and got The California Right to Know Genetically Engineered Food Act (Proposition 37) on the ballot for this November's elections.  According to their website:

"The initiative would simply require food sold in retail outlets to be labeled if it is produced through genetic engineering, and would not allow these products to be labeled as “natural.” Prop 37 gives companies 18 months to change their labels, and allows for the GMO disclosure to appear wherever they choose on packaging."

Many American food companies sell non-GM foods to European consumers, and have different, genetically modified formulas which they sell to us here at home.  If the Prop 37 labeling initiative passes, food companies are much more likely to reformulate their products and source from non-GM ingredients rather than label their products as GMO.

In the meantime, for those who wish to avoid genetically engineered corn while returning to the healthful diet of our forefathers, here are some other options:

If possible, there is, of course, the option of growing your own corn in your yard or in a community garden.  Be sure to grow from organic or heirloom seeds which were not genetically modified.  Seed Savers Exchange is a great organization dedicated to saving and sharing a wide variety of heirloom seeds.

It is my sincere hope that as more people embrace the traditional diets of all of our heritages, that we will safely navigate through this environmental and health crisis facing our world, and work together to create a better and more just environment for all.  As we move forward in good health and in good spirits, let us restore balance to the world as we have done so within ourselves.