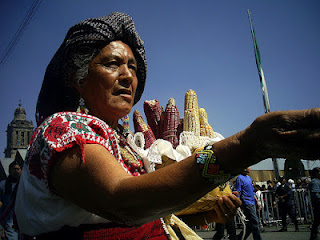 Obesity.  Diabetes.  Heart disease.  Cancer.  These are some the the most prominent diseases afflicting modern Native American, Mexican and Latino communities in the United States.  Yet indigenous people in the past were much healthier, and did not suffer from the same epidemic of poor health that pervades these communities today.  They subsisted on a macrobiotic diet based around the consumption of the whole grain of the Americas-- Corn.  The solution to these epidemics of degenerative disease and of the tragic and needless suffering of the Native and Latin American communities lies in returning to our traditional ways of living and eating.  In these modern times, however, our ability to reclaim our heritage and health through the consumption of Corn is profoundly threatened by modern agricultural corporations and by the policies of the U.S. government.

Mexican people have a very ancient and intimate relationship with Corn.  For over 10, 000 years, Mexican farmers selectively bred and domesticated Maize from it's ancestor, a wild grass called Teosinte.  Teosinte, from the Nahuatl "teocintli," or "Sacred Corn" is very different from modern Corn.  Over the centuries, ancient Mexicans selectively picked the largest of the Teosinte kernels and bred from it the first ancient forms of Maize.  This domesticated whole grain spread throughout North and South America.  It made civilization possible and was bred with incredible diversity, allowing for it's adaptation to numerous climactic conditions.  As whole grains elsewhere in the world, Corn took it's place as the primary and biologically correct staple food of humanity. Corn was considered by all who grew it to be a sacred gift.  The Aztec, or Mexica people told of how Quetzalcoatl gave a kernel of Corn to people to plant, and they celebrated Centeotl, the maize god, as a source of life.  Mayan legends tell of the Creators succeeding in fashioning the first humans out of Corn dough.  The Giant White Corn of the Andes was sacred to the Incas.  For the Hopi, Cherokee, Iroquois and numerous other native peoples, Corn was and is at the center of their spiritual identity.

Corn was often grown together with Beans and Squash, in a system known as the Three Sisters.  Indigenous people who followed a traditional diet composed primarily of corn, beans, squash, vegetables, fruit, wild plants, fish and game enjoyed abundant health and longevity, absent of the current epidemics of degenerative disease which so often plagues their modern-day descendants in the U.S.

When Cortes and the Spanish conquistadors arrived in Mexico, they were amazed to discover that the Aztec lifespan exceeded their own by at least 10 years.  The benefits of a traditional diet and lifestyle can still be seen in traditional people such as the Tarahumara, or Raramuri people of Mexico.  The Raramuri are arguably the best endurance runners on Earth, and it is well documented that those following a traditional diet are almost completely free of many common degenerative diseases.  High blood pressure and obesity were unknown to them, and their cancer rates are extremely low.  In fact, it is only since the introduction of modern processed foods such as top ramen, chips and soda, that the Tarahumara have had to invent names for diseases like "high blood pressure."

Throughout time, when people would become sick, Native American healers would recommend that the patient " return to the arms of Mother Corn" in order to heal themselves.  Just as Hippocrates prescribed a simple diet of Barley porridge to the sick, so would native people consume a simple porridge, or Atoli of corn to reverse illness.  The traditional Native American diet based on corn and corn products such as tortillas, tamales, pupusas, atole and cornbread remains the basis for much of the modern cuisine of Mexican and Latin American people.  The foundation to heal ourselves and our communities here in the United States lies in returning to our traditional ways of eating diverse, high-quality, whole-grain plant-based meals.

Our ability to "return to Mother Corn," the sacred grain of the Americas, has been profoundly jeopardized by a modern threat which has changed the very structure of Corn on a physical and spiritual level: genetic modification.

Continue on to Part 2…