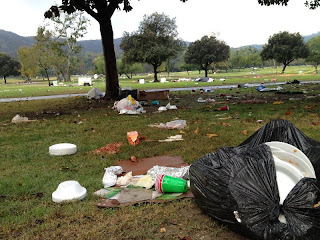 After having reported to the City of Pasadena that the plastic pollution I'd brought to their attention in the Central Arroyo Seco had not been adequately cleaned, I met personally with Public Works crew supervisor Ted Latta. He wanted me to show him the polluted site I had reported along the bank of the Arroyo off of Washington Blvd, as he and his crew could not find it. When I took him up the road and showed him the area, he recognized it and exclaimed "Oh, you mean the illegal dumping ground!" According to Ted, construction contractors frequently dump old windows, cement, wood and various other types of constriction debris along that bank and elsewhere late at night to avoid paying to properly dispose of it at the landfill. "Yeah, we'll have that cleaned up for you" Ted told me.

After showing him the polluted location along Washington Blvd, I asked Ted if he would accompany me to inspect the polluted wetland area below Devil's Gate Dam which was reported to me to have been cleaned. Of course, as documented in my previous post, the area was still riddled with bits of styrene and other pollution. Ted seemed happy to take me there. "I know that area is clean because I cleaned it myself" he said.

Upon our arrival, I pointed out all of the micro-trash and other not-so-small items of plastic pollution which he had neglected to remove from this sensitive habitat. Ted seemed a bit bewildered that I should be concerned with particles of styrene and plastic which were spread throughout the tules and mulch. "My guys would never pick that up" he said, speaking of his crew. "They wouldn't see that as trash..." Ted explained that his crew only cleaned up the most obvious items of trash in the Arroyo, and that if his Public Works crew actually spent the time to properly maintain the place, they'd be there all day and never get anything else done. Hearing this was a verification of what I have long observed in the Central Arroyo, especially after events-- the City only picks up the "big stuff," and leaves all of the plastic micro-trash to continually accumulate, photo-degrade and permanently degrade the environment.
Mr. Latta assured me that he would return to the wetland and clean the remainder of the pollution, and on our way back he showed me some of the various projects he was supervising in the Arroyo. I found that Ted has an artistic eye, as evidenced by his desire to keep the Arroyo looking natural and un-manicured. Fallen limbs were left as habitat for creatures and native trees were allowed to grow branches naturally from their bottoms. I admired Ted's vision of leaving things in the Arroyo as looking "like a painting," and lamented the fact that his work crew was so underfunded and short on manpower. The Arroyo has become a much different place than when he first began working there. "Twenty years ago, nobody came down here to run (the Rose Bowl loop) except the boxers!" He told me.

A few days later, I was happy to find that the bank along Washington Blvd. had been cleaned. Of course, the amount of trash in the Central Arroyo remains staggering, and I have since spent many hours picking up hundreds of bits of plastic from off the trails. I also recently led a cleanup of Brookside Park for the Arroyo Seco Foundation. This disheartening degradation is what inspired me to reach out to Pasadena's city manager Michael Beck. I sent Mr. Beck a link to my posts, an received the following reply:

Tim,
Thanks for sharing your concern. I have copied the public works director to make sure she is aware of the debris. I would also encourage you to suggest on your blog that those that are walking in the area try to help keep the area clean by picking up debris when appropriate and feasible.
Thanks, ...Michael
---------------------
Michael J. Beck
City Manager
(626) 744-4333

Dear Mr. Beck,
Thank you for your email. To your point about encouraging citizens to assist with the cleanup of the Arroyo, I would like to note that I often see other people picking up trash as they hike through the Arroyo. In addition, as Outreach Coordinator for the Arroyo Seco Foundation, I have organized and led cleanup events in various parts of the Arroyo on a regular basis. Recently, as part of Coastal Cleanup Day, I led a group of volunteers who removed 60 to 70 large bags of trash from the natural stream area under the Colorado Street Bridge-- approximately one ton of waste.
The citizens of Pasadena are actively involved in cleanup efforts in the Arroyo on an informal and on a formal basis. However, volunteer efforts are not sufficient. The City of Pasadena needs to do more.
Regards,
Tim Martinez

To which Mr. Beck responded:

Tim,
And we will do more. Thanks for bringing this to our attention. We are committed to improving the entire area. Siobhan is a very capable leader and effective manager. She will get things done.
Thanks, …Michael

My suggestions for improving the Arroyo:

Parking Fee Program: The Urban Land Institute (ULI) visited Pasadena in January 2012 to conduct a Governors Advisory Panel for the 254 acre Central Arroyo. The study area contained the Rose Bowl stadium, Brookside Golf Course and Clubhouse, Brookside Park, Rose Bowl Aquatics Center, Kidspace Museum, surface parking lots and the 3.3 mile recreational loop.
The ULI accurately described the Central Arroyo as a world class area which "contributes significantly to the economic, social and environmental well-being of the city and the greater Los Angeles area." According to the ULI, "parking is an untapped potential revenue source for the
city. The number of current and potential visitors strongly suggests the need to develop a fee- based parking program."
I remember as a kid back in the 1990's, Old Pasadena was much grittier and polluted than it is today. The historic alleyways smelled awful and overflowed with trash, and from what I understand, conditions were much worse back in the 1980's. Old Pasadena has now become a model for downtown revitalization, due to the fact that once parking meters were installed, the money was kept in the area and used to implement Old Pasadena's Clean & Safe program. Everyday, "Clean Team" personnel maintain the streets, alley walkways, and sidewalks of Old Pasadena. Their continuous activities include street sweeping, sidewalk pressure washing, daily porter service, trash removal, and other cleaning initiatives. Clean & Safe also provides for the Old Pasadena Ambassador Guide Program which enhances Pasadena's downtown experience further.
I suggest that Pasadena follow the Urban Land Institute's excellent suggestion for generating revenue from parking in the Central Arroyo, and apply it to an equivalent, Arroyo Seco version of Old Pasadena's Clean & Safe program. Just as the streets and alleyways of Old Town are now kept spotlessly clean, so should the Arroyo trails, facilities and surrounding parkland be kept in pristine condition. We should accept nothing less for the world-class parkland of the Central Arroyo.

City Work Crew Training: Once sustainable funding is secured to properly maintain the Central Arroyo, it will become necessary to educate city workers about modern environmental issues. Plastic pollution has quickly become one of the greatest sources of pollution, on both land and sea. This toxic petrochemical waste cannot be digested by the Earth, and poses a profound threat to the continuation of life on this planet. It is imperative that city workers learn the threats posed by this issue, and are trained to recognize the vital importance of cleaning even small bits of plastic which accumulate throughout the Arroyo. This will ensure that Pasadena follows the best practices in the protection of the Arroyo Seco watershed, the Los Angeles River and the vast, irreplaceable habitat of the Pacific Ocean.

Diverse Utilization of the Central Arroyo: The City of Pasadena should heed the Urban Land Institute's wise suggestion "that the city not be swayed by the offer to temporarily host the National Football League. It was the panel’s opinion that such an effort would be detrimental to the ultimate goal of making the Central Arroyo Seco a sustainable part of the Pasadena community."
In the recent Pasadena Star News Op-ed: Rose Bowl gem can be cubic zirconia, Anne Yu describes the displacement that occurs for the various users of the Arroyo as a result of too many large events:
"With the... numerous events - annual weekend dog show, food truck festival, soccer tournaments, and the many charity walks - that occur over the weekends, regular users of the
amenities in the area encounter some kind of disruption for nearly half of the 52 weekends a year."
"The fact that citizens who care about the city have to regularly give up our neighborhood for tailgaters who get drunk and start fights is shameful."
Just imagine how much more displacement of runners, hikers, bicyclists, swimmers, parents and children going to Kidspace, golfers, soccer players and other regular users of the Central Arroyo will be displaced if the Pasadena City Council amends the the Arroyo Seco Public Lands Ordinance to increase the number of displacement (major) events from 12 to 25 to allow a National Football League (NFL) team to use the Rose Bowl for five continuous years... not to mention the vast increase in trash and plastic pollution which would surely occur as a result. The diverse uses of the Arroyo should not be displaced by allowing such an intrusion to occur.

Keep Hahamongna Natural:  Finally, the City of Pasadena should abandon any plans to go forward with the construction of a soccer field and parking lot in Hahamongna Watershed Park. Pasadena cannot adequately maintain the parkland and city services it already provides. Adding another area for the city to have to maintain would further spread city resources too thin, not to mention the fact that the soccer field construction described under the City's Multi-benefit Multi- Use project would destroy the rich native California alluvial scrub habitat contained in the park.
Posted by Tim Martinez at 10:30 PM