I've been practicing making fire by friction with the hand drill, which was the traditional way to start fire here in the Americas for thousands of years.

Once the principle of creating a friction fire is understood, it only takes a moderate amount of practice to learn this ancient skill.  Your hands may blister the first few times, but the feeling of forming that coal and blowing your tinder bundle into a flame is exhilarating!

To make your own fire making kit, learn to gather plants ethically so that they thrive from being tended properly.  Grow your own native plants, and learn about responsible practices from your local native plant nursery.

I gathered already-dead willow branches for my hearth, dead mugwort leaves for the tinder, and used a mulefat drill which was cut while pruning a shrub.

One aspect of making fire with the hand drill that I find interesting is the lore surrounding it.  The Nahuatl-speaking people of Mexico performed the New Fire Ceremony, or the Binding of the Years, once every 52 years - a full cycle of the Mesoamerican calendar.  At the end of the calendrical cycle, old household items were discarded, people fasted and purified, and all the fires in the community were extinguished. 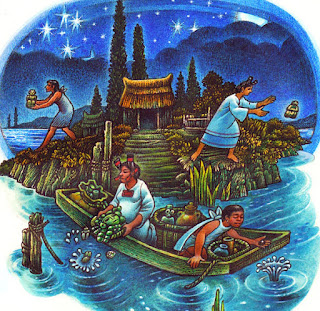 In the city of Tenochtitlan, atop a mountain called Huixachtlan, a new fire was started once the constellation known as "the fire drill" (Orion's belt) rose from the horizon.  This fire was required to be started with the hand drill, and signaled the beginning of the New Calendar Round.  It was used to light a huge bonfire of bundled wood representing the bundling of the 52 year cycle, and from it runners would light torches and rekindle the temple hearths throughout the city. 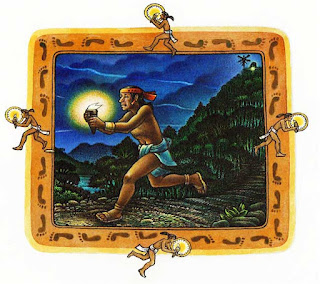 The imagery of lighting a new fire with a hand drill was used to denote the beginning of a new era, such as an ascension to power.  In the Historia Tolteca-Chichimeca, a person wearing a coyote skin is depicted lighting the new fire above Chicomoztoc; the "seven caves" which were the mythical origin place of the Nahua peoples.  This new fire ceremony represents the emergence of the people from these caves, and announces the beginning of their migration south. 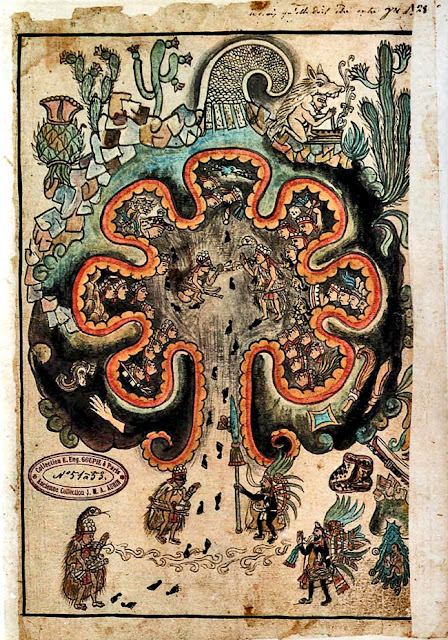 In his book "Survival Skills of Native California" Paul Campbell describes how Ishi, the last member of the Yahi people of California, classified the hearth of the fire drill as the "female element" and the drill as the "man piece" or male element.  According to Campbell:

"The hand fire drill was universal and ancient.  Mayan hieroglyphs of the fire-making hand drill extend back in an unbroken line to the Olmec iconography of San Lorenzo -- the first American Indian civilization -- some 3,000 years ago.  Undoubtedly, the skill is thousands of years older, lost in the Paleolithic.  Fittingly it was the Olmec god of the north and darkness who made compensatory fire with the sticks... the Karok of California made new fire with the sticks to begin a new year.  So important was the drill, young Aztec men had it burned onto their wrists in the form of the fire drill constellation... The ancient Maya ritual of the Bakabs exhorted, 'To be charmed, the fire is always kindled with a fire drill.'

It was the simple two-piece hand drill that the ancients revered... The ability to make fire in the wild is perhaps the most important survival skill one can possess -- literally the difference between a dark shivering death and a hot meal in the glow of a warming blaze.  It cannot be taught by theory.  Only through familiarity with the range of materials and techniques... in a variety of environments and by practice does the fire come forth."