After documenting my unsuccessful attempt to report two sites of plastic pollution to the City of Pasadena in my last post, I emailed City Manager Michael Beck and the two Assistant City Managers, as well as my city councilman Steve Madison.  My message to them all included a link to the Arroyo Sage blog post which details my experience.

I received email responses from Assistant City Managers Julie Gutierrez and Steve Mermell, apologizing, and saying they'd forward my concerns to someone who could assist me.  I received a voicemail Wednesday afternoon from Charles Peretz, the Administrator of Natural Resources, in which he appologiged for my experience.  He promised that the next day (Thursday) someone would be out there to clean the "litter" that I reported. He left me his phone number and said it shouldn't have been handled this way and that the city needs to work on handling citizen involvement better.

Thursday, I recieved a call from Ted Latta, the Public Works crew supervisor.  He said that his crew would be there that day and clean up the mess.  I was encouraged that this was going to get done.

On Friday I went for a run down the same trail, and inspected the area below Devil's Gate Dam that I had reported.  Nothing had changed.  These pics detail the scene: 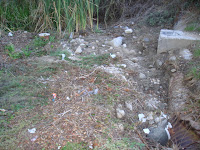 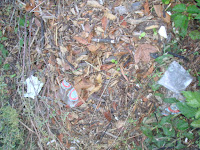 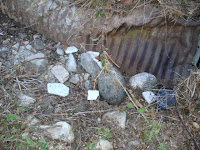 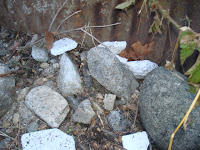 I ran some more over to Washington Blvd, and surveyed the scene again.  Still covered in plastic.  This time I took a video documentation of what I found:

After my run, I called Charles Peretz and expressed my frustration that both he and Ted Latta had promised me that the sites would be cleaned the day before, and had not been.  He was very polite and told me that he had just gotten off the phone with Mr. Latta, and that they couldn't get to it until today.  Mr. Peretz said that unless something came up, that the pollution would be cleaned that day, and that he'd let me know when the job was complete.

I thanked him for being so responsive, though I let him know that such neglect and pollution is a constant issue in the Central Arroyo.  I described how Brookside Park is overrun with plastic straw wrappers from juice drinks and how it's riddled with plastic water bottle caps on the ground.  People stuff plastic chip bags into the native ground squirrel dens and into bushes.  I suggested that, given the current state of neglect and degradation of the Central Arroyo,  perhaps he and others responsible for maintaining these areas should make it known to the City that their resources are stretched too thin to accommodate additional uses and facilities such as the NFL or the Soccer in Hahamongna.

I received an email from Mr. Peretz that evening notifying me that the plastic pollution below Devil's Gate had been cleaned.  He attached the below picture: 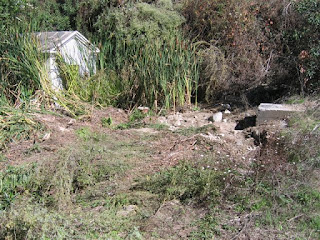 Mr. Peretz said that the crew were having trouble finding the second site along Washington Blvd, and that Ted Latta would contact me soon to find out exactly where to go.  I have not heard back from him yet.  He also mentioned, in regard to my comments to him about pollution being the norm in Brookside:

"I chatted with Ted about your observations in the area of the high use athletic fields at Brookside and Area H.  He did confirm my understanding that this is a core service performed on a daily basis. Unfortunately, based on the high use of this area, the amount of trash  produced by users of this area is great.  Ted will assess whether relocating (or adding additional) trash cans might mitigate this issue."

During a Facebook conversation below my post on the Save Hahamongna Facebook page, my friend Barbara Ellis related a similarly difficult interaction with the City recently:


"That''s exactly what I found when I tried to tell them about pollution (bleach) in Berkshire Creek. I got NOWHERE. No-one called back. Voicemail boxes full, and so on. The trash down by that spring, and the cutting down of the tule there, shocked me as well. I reported the graffiti under the freeway bridge - Is it still there?

The graffiti was indeed still there.  My friend Petrea Burchard said:

"Funding has been cut so seriously that some city departments are down to one person. Individual workers are not to blame in most cases. But it's true, they will respond to the squeaky wheel, so we have to squeak and keep on squeaking."

We both agreed that this ultimately begs the question, how does the City of Pasadena expect to properly maintain an additional soccer field and parking lot in Hahamongna, or clean up after NFL fans in the Rose Bowl if they cannot even properly maintain the facilities and uses of the Arroyo we already have?

Once I have received word that the Washington Blvd. pollution has also been removed, I will post the (hopefully) final update in this series and describe the adequacy of the city's cleanup.  Until the Arroyo and the City of Pasadena are adequately maintained as the pristine, natural and healthy places that they should be, I'm just going to continue to be a squeaky wheel, and keep on squeaking!