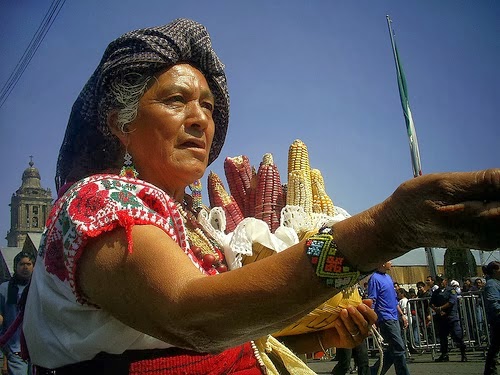 Obesity.  Diabetes.  Cancer.  These are some of the most prominent diseases afflicting modern Native American, Mexican, and Latino communities in the United States.  Yet indigenous people in the past were much healthier, and did not suffer from the same epidemic of poor health that pervades these communities today.  They subsisted on a macrobiotic diet based around the consumption of the whole grain of the Americas - corn.

The solution to these epidemics of degenerative disease and of the tragic and needless suffering of the Native and Latin American communities lies in returning to our traditional ways of living and eating.  In these modern times, however, our ability to reclaim our heritage and health through the consumption of corn is profoundly threatened by modern agricultural corporations and by the policies of the U.S. government. 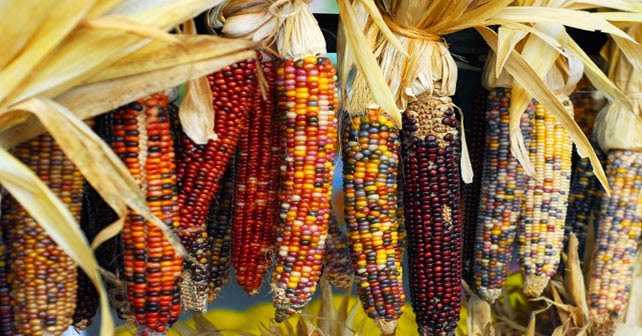 Mexican people have a very ancient and intimate relationship with corn.  For over 10,000 years, Mexican farmers selectively bred and domesticated maize from it's ancestor, a wild grass called teosinte.  Teosinte, from the Nahuatl "teocintli," or "sacred corn" is very different from modern corn.  Over the centuries, ancient Mexicans selectively picked the largest of the teosinte kernels and bred from it the first ancient forms of maize.  This domesticated whole grain spread throughout North and South America.  It made civilization possible and was bred with incredible diversity, allowing for it's adaptation to numerous climatic conditions.  As whole grains elsewhere in the world, corn took it's place as the primary and biologically correct staple food of humanity. 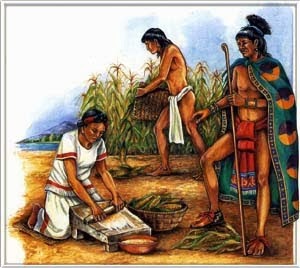 Corn was considered by all who grew it to be a sacred gift.  The Aztec, or Mexica people told of how Quetzalcoatl gave a kernel of corn to people to plant, and they celebrated Centeotl, the maize god, as a source of life.  Mayan legends tell of the Creators succeeding in fashioning the first humans out of corn dough.  The Giant White Corn of the Andes was sacred to the Incas.  For the Hopi, Cherokee, Iroquois and numerous other native peoples, corn was and still remains at the center of their spiritual identity. 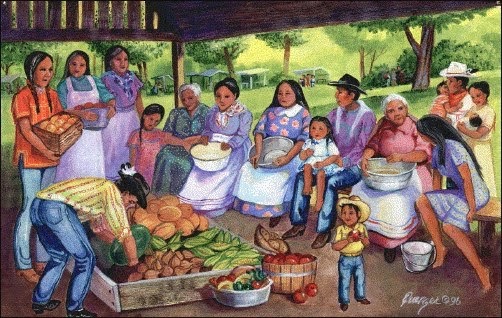 Corn was often grown together with beans and squash, in a system known as the Three Sisters.  Indigenous people who followed a traditional diet composed primarily of corn, beans, squash, vegetables, fruit, wild plants, fish and game enjoyed abundant health and longevity, absent of the current epidemics of degenerative disease which so often plague their modern-day descendants in the U.S. 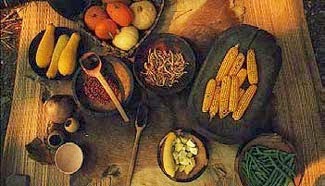 When Cortes and the Spanish conquistadors arrived in Mexico, they were amazed to discover that the Aztec lifespan exceeded their own by twice as much.  The benefits of a traditional diet and lifestyle can still be seen in traditional people such as the Tarahumara, or Raramuri people of Mexico.  The Raramuri are arguably the best endurance runners on Earth, and it is well documented that those following a traditional diet are almost completely free of many common degenerative diseases.  High blood pressure and obesity were unknown to them, and their cancer rates are extremely low.  In fact, it is only since the introduction of modern processed foods such as top ramen, chips and soda, that the Tarahumara have had to invent names for diseases like "high blood pressure.” 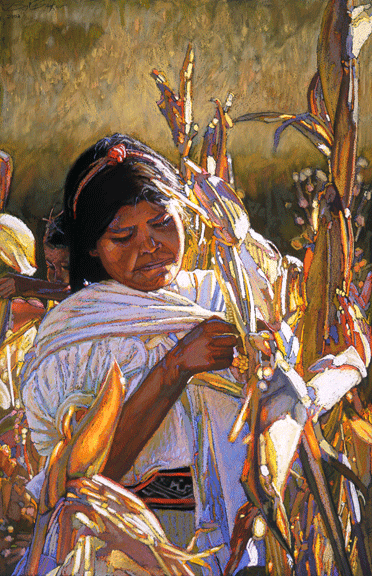 Throughout time, when people would become sick, Native American healers would recommend that the patient " return to the arms of Mother Corn" in order to heal themselves.  Just as Hippocrates prescribed a simple diet of barley porridge to the sick, so would native people consume a simple porridge, or atolli of corn to reverse illness.  The traditional Native American diet based on corn and corn products such as tortillas, tamales, pupusas, atole and cornbread remains the basis for much of the modern cuisine of Mexican and Latin American people.  The foundation to heal ourselves and our communities here in the United States lies in returning to our traditional ways of eating diverse, high-quality, whole-grain, plant-based meals.

Our ability to "return to Mother Corn," the sacred grain of the Americas, has been profoundly jeopardized by a modern threat which has changed the very structure of corn on a physical and spiritual level: genetic modification.

"A genetically engineered food is a plant or meat product that has had its DNA artificially altered in a laboratory by genes from other plants, animals, viruses, or bacteria in order to produce foreign compounds in that food. This type of genetic alteration is not found in nature and is experimental.

GMO's have not been proven safe, and long-term health studies have not been conducted. A growing body of peer-reviewed studies has linked these foods to allergies, organ toxicity, and other health problems. These studies must be followed up. However, unlike the strict safety evaluations required for the approval of new drugs, the US Food and Drug Administration does not require safety studies for genetically engineered foods.” 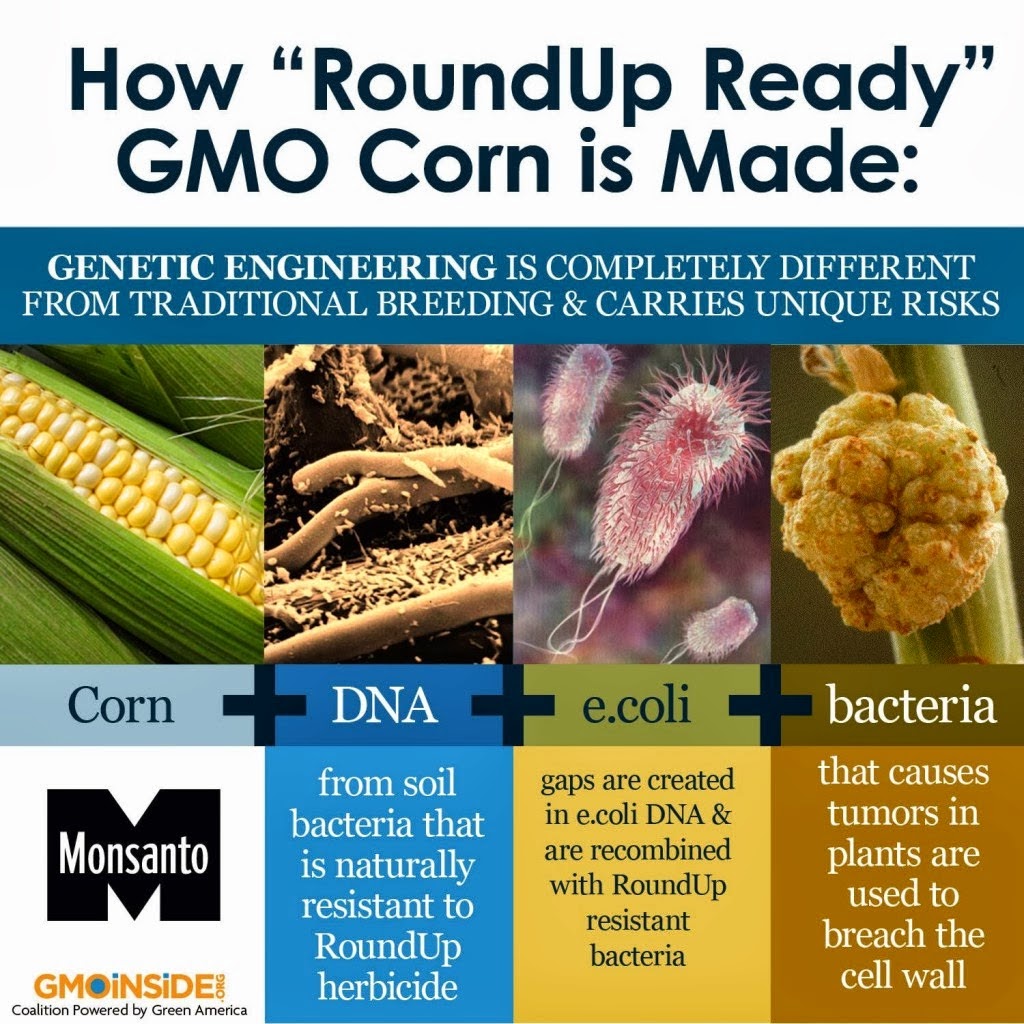 As we can see from the information above, what has been for centuries a life-giving source of sustenance is fast becoming a food source with uncertain effects on health.  Currently up to 85% of U.S. corn is genetically modified.

Biotechnology companies claim that genetically modified crops are needed to help feed the world, yet these claims do not stand up to scrutiny.  A 2009 study by the Union of Concerned Scientists concluded that "experimental high-yield genetically engineered crops have not succeeded."  In fact, a U.N. study concluded that "we won't solve hunger and stop climate change with industrial farming on large plantations,"  and that "organic and sustainable small scale farming could double food production in the parts of the world where hunger is the biggest issue…"

Why then would companies like Monsanto, the agricultural biotechnology corporation, want to keep producing genetically modified crops?  The answer is that Monsanto owns patents on their genetically modified seeds, and use aggressive legal tactics to sue small farmers for patent infringement any time pollen or seeds from a farm growing GM crops drift onto their land.

This article describes Monsanto's attempt to monopolize the world's food supply.  Fields of genetically modified crops would have to be completely isolated to prevent the transfer of pollen and genes to non-GM crops, which is impossible.  There is no such thing as co-existence between organic and genetically-modified crops.  And why isn't the U.S. government doing anything to prevent this injustice?   It's called the government's "revolving door" with Monsanto. 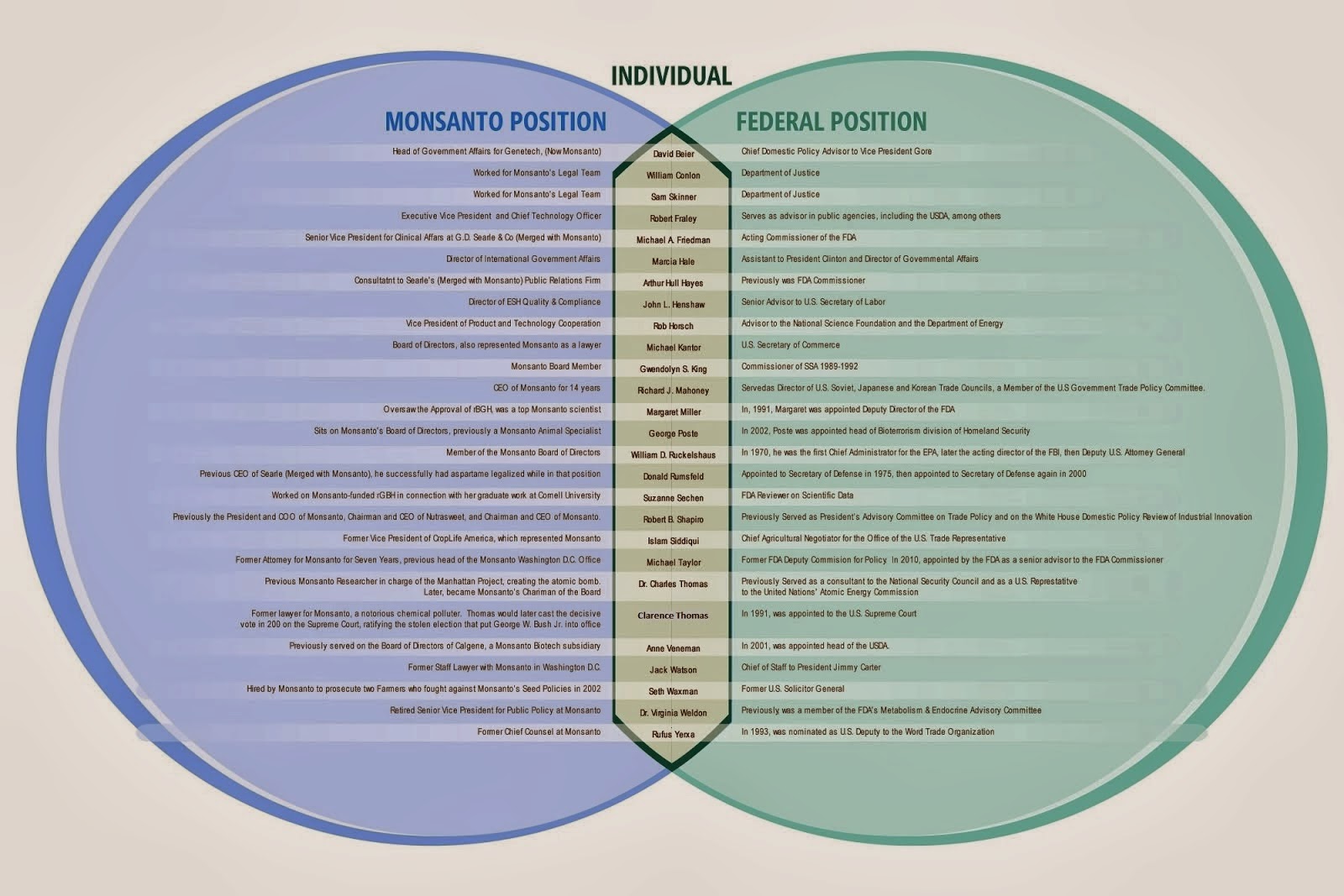 While there is still controversy over whether or not GM foods pose a risk to health, the fact remains that because of genetic modification, the genetic heritage of our traditional grain is in jeopardy.  The loss of natural maize entails a loss not only of genetic resources and of cultural heritage, but the loss of a spiritual connection with the land and with the food which sustains us. 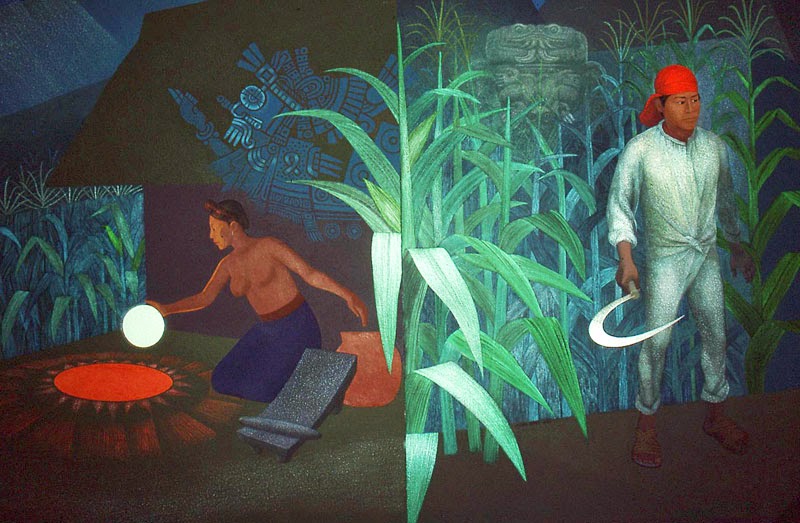 “We have learned that agrochemical companies patented our maize.  They are putting in genes from other living beings and many chemicals to completely put an end to our natural maize, so we’ll have to buy nothing but transgenic maize. If these agrochemical companies try to do away with our maize, it will be like putting an end to part of the culture that our Mayan ancestors bequeathed to us. Our indigenous peasant grandparents gave their labor and their hearts; they cried as they asked protection from our Creator for their work to bear fruit.”

But there is hope.

Momentum is building around the nation demanding that Americans gain the right to know what we are eating.  In the meantime, for those who wish to avoid genetically engineered corn while returning to the healthful diet of our forefathers, here are some other options: 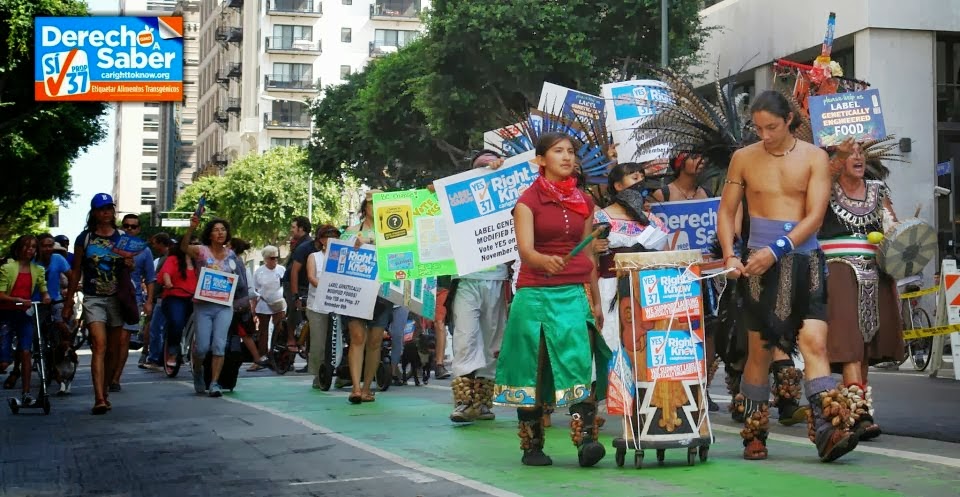 If you wish to grow your own corn in your yard or in a community garden, be sure to grow from organic or heirloom seeds which were not genetically modified.  Seed Savers Exchange and Native Seeds/SEARCH are great organizations dedicated to saving and sharing a wide variety of heirloom seeds. 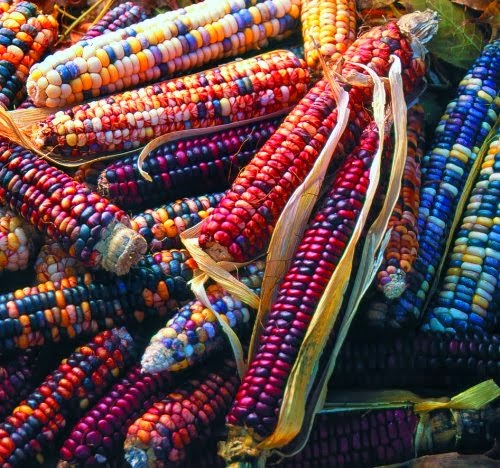 It is my sincere hope that as more people embrace the traditional diets of all of our heritages, that we will safely navigate through this environmental and health crisis facing our world, and work together to create a better and more just environment for all.  As we move forward in good health and in good spirits, let us restore balance to the world as we have done so within ourselves.
This article has been adapted from it’s original publication in the March/April 2013 issue of Awareness Magazine.
Posted by Tim Martinez at 10:40 AM