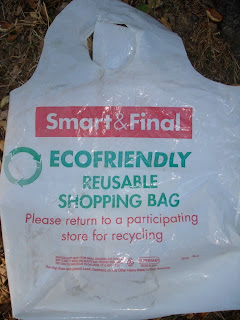 I found this thick plastic bag littering the banks of the Central Arroyo yesterday, and was struck by the words “Eco Friendly” printed boldly upon it.  I often find such “eco-trash” as I like to call it, claiming to be helping the environment, and yet simultaneously polluting it.  Let’s examine the claims on this Smart & Final bag, and determine how environmentally friendly it really is.

This plastic bag claims to be “reusable”, yet it was discarded as litter onto the banks of the Arroyo.  Perhaps the thickness of the plastic means that it may be used more than once, but it also means more plastic pollution to permanently degrade the environment when some of them inevitably become litter.

This plastic bag, like all others, claims to be recyclable - yet plastic recycling is a myth.  Plastic cannot be recycled in the way that materials such as glass can be, it can only be down-cycled.  For instance, a glass bottle may be turned into another glass bottle, yet a plastic bottle can only be down-cycled into a doormat, or another plastic item which cannot be recycled.  Therefore, all plastic eventually ends up in a landfill, or worse - as plastic pollution of land and sea.

This plastic bag from Smart & Final was polluting the Arroyo, threatening wildlife, and would have photo-degraded it's tiny, sometimes microscopic plastic particles into the soil and waterways of the Arroyo had it not been removed in time.  These particles attract toxic chemicals onto themselves, such as the banned pesticide DDT, infiltrate the entire food chain of the ocean, and are impossible to remove from the environment.

Such “greenwashing” ploys by Smart & Final and other companies are shameful, yet very common.  Additional such examples of green-washed litter in the Arroyo will be displayed on this blog in the future by clicking on my newly created “eco-trash” label - because when it’s plastic and polluting the Arroyo, it doesn’t matter how “green” it claims to be!