Exploring the Hills of Mt. Washington

Last week, my friend and Arroyo Seco Foundation colleague Scott Cher took me on a walking tour of Mt. Washington, which he has long called home.  Nestled in the hills behind the majestic Southwest Museum, Mount Washington is a historic LA neighborhood with commanding vistas and surrounded by nature.  We set out to explore the open spaces and habitat in the area that have been set aside and preserved, and those which still need protection. 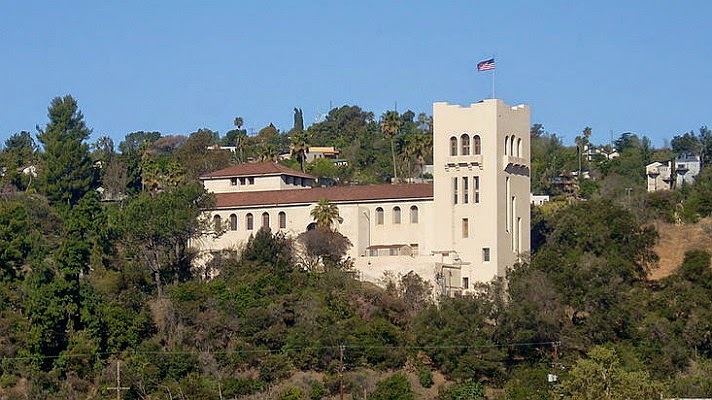 We began our walk by hiking through Moon Canyon Park.  Moon Canyon is an unmaintained Los Angeles city park with great potential for habitat restoration.  The canyon slopes are home to the rare California Walnut tree, which Mt. Washington is known for.

Once we reached San Rafael Avenue at the top of the canyon, we were rewarded with views of Highland Park, Eagle Rock, and the San Gabriel Mountains.  We then crossed the road and ventured into the boundaries of Heidelberg Park. 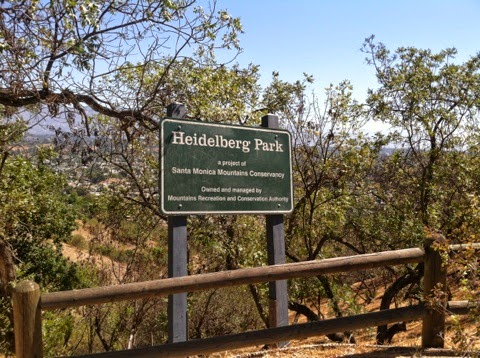 The slopes of Heidelberg Park were covered with such a dense canopy of oak and walnut woodland that when I gazed upward it felt as though I could have been deep in the forest.  We encountered beautiful native flowers which Scott later identified as cliff desertdandelion. 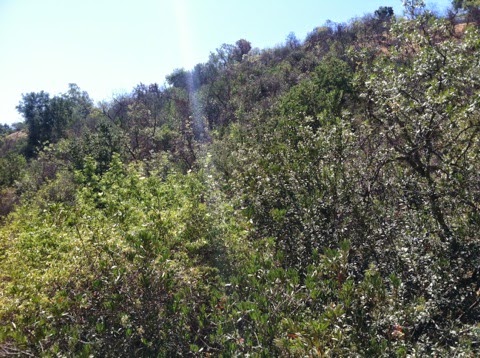 As we walked further down the canyon trail, we encountered seasonal stream-beds, elderberry trees, poison oak, toyon, and a skateboard rope-swing!  I climbed onto my new “hoverboard” and told Scott of the various similar spots I’d discovered as a kid while exploring Pasadena’s San Rafael Hills.  I smiled at how kids growing up in the hills will explore them and make them their own.

After climbing back out of Heidelberg Park, we walked to beautiful Elyria Canyon Park.  We passed by the gates of the Self-Realization Fellowship headquarters on the way, which opened in 1925 on the former site of the Mt. Washington Hotel.  The historic homes on San Rafael Avenue surrounding the Fellowship headquarters reminded me of the beautiful Arroyo Seco neighborhood of Prospect Park in Pasadena. 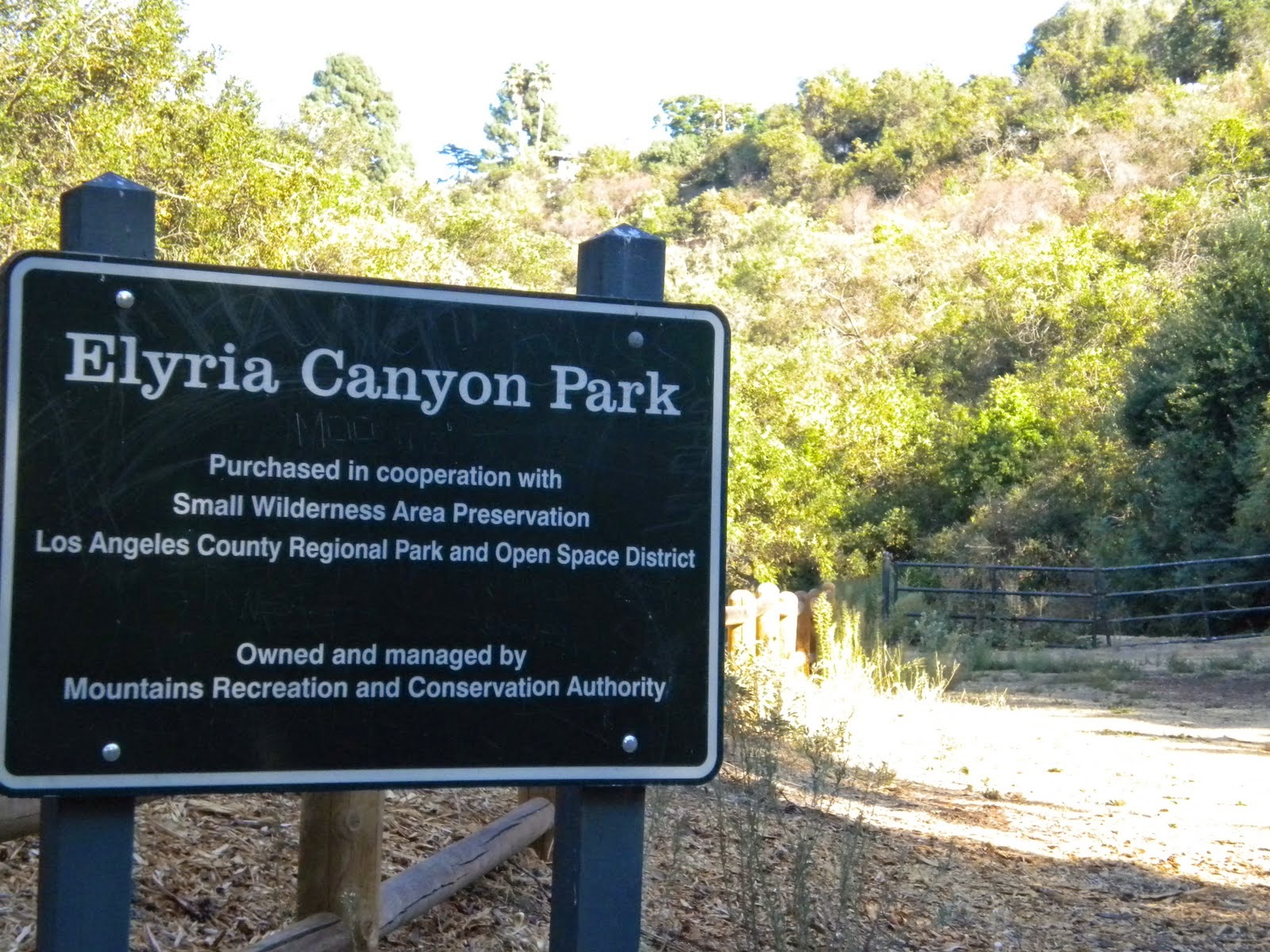 At the bottom of Elyria Canyon, we encountered a plant which at first looked to be Sacred Datura.  Upon closer inspection, Scott found that growing from this plant were small, watermelon-looking gourds, which I later identified as Buffalo Gourd.  Scott noted that they smelled like squash, yet the leaves still smelled a bit like Datura to me.

In the bottom of Elyria Canyon, we observed more riparian plant species along the dry creek-bed.  Mulefat and sycamore trees indicated the presence of water, and rusted old farm equipment which had been long cast-aside served as a reminder of a bygone era -- of a time when this part of Los Angeles was undeveloped and agricultural. 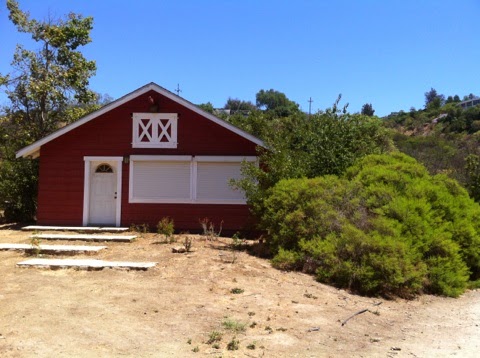 Contributing greatly to the area’s rustic atmosphere was the Red Barn in Elyria Canyon Park.  Growing next to the barn was a beautiful, gigantic Coyote Brush, which attracts various insects and pollinators.  (Incidentally, coyote brush is also the best cure for poison oak!) 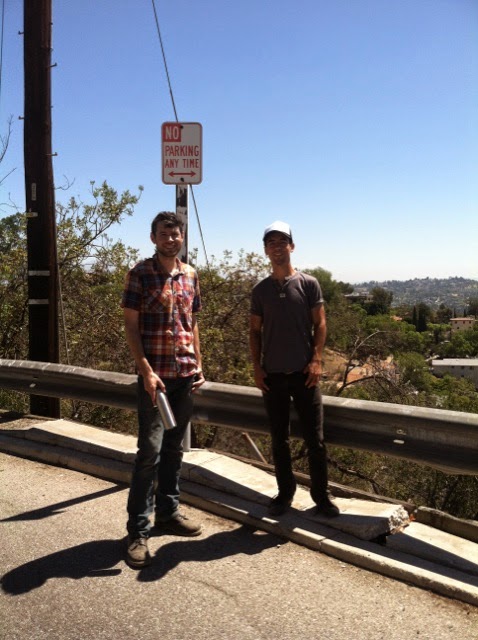 I had a great time exploring the hills of Mt. Washington with Scott.  There is no better perspective through which to view the land than the eyes of a native.  The more I have met and befriended people who grew up in the hills of the Arroyo Seco, the more I’ve realized their important role in shaping our character.
If we wish to live in a country which people love, then let us preserve the very places that residents fall in love with.  There are still natural areas of Mount Washington that need to be protected.  By saving our remaining open spaces, we will be providing future generations with cities worth taking pride in.  We will be creating neighborhoods of citizens who love the land upon which they live, and who will in turn love and nurture their community, their nation, and indeed, the world.