It's been a week since the Rose Bowl game on New Year's Day, and the Central Arroyo remains riddled with trash and plastic pollution.  However, it wasn't the City of Pasadena's predictably inadequate "cleanup" effort after the game which most upset me these past few days, but rather the City's own plastic pollution which was produced in it's wake.

While driving north along Linda Vista Avenue yesterday afternoon, I was shocked to witness the manner in which a city employee carelessly removed the temporary "No Parking" signs posted on the trees along the road.  The temporary signs, held to the trees with a Saran-wrap-type plastic, were simply torn from the tree, and the remaining plastic wrap was left by the worker along the road and the bank of the Arroyo.  I knew that she would continue to leave the plastic carelessly along the road as she hastily continued on with her task.

This afternoon, as I biked through the still-trashed Central Arroyo to Brookside Park, I discovered more of the same.  I took photographic evidence of the plastic pollution left by the City's lazy, inadequate removal of temporary signs posted on the Sycamore trees which line N. Arroyo Blvd. just South of Seco Street.  The below photos depict the amount of pollution left by the city within the distance of merely five trees.

(The first picture seen below depicts the type of temporary signs posted throughout the Arroyo with plastic wrap.  The last photo depicts the plastic which the city disregarded and left as pollution on Arroyo Blvd.-- within a span of no more than five Sycamore trees.) 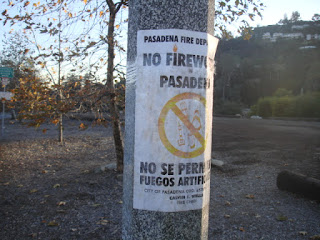 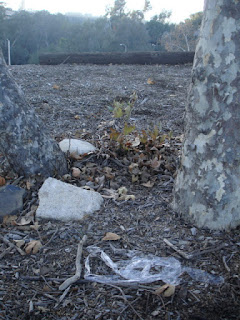 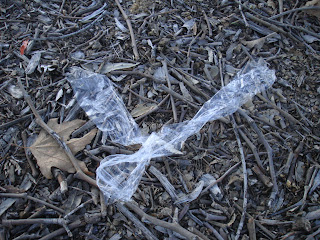 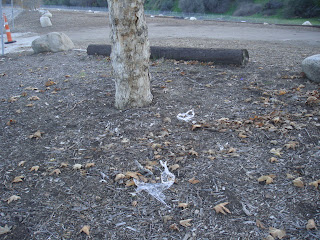 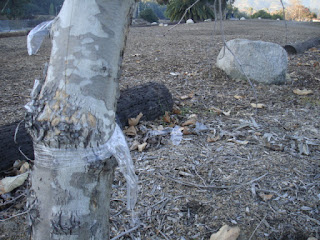 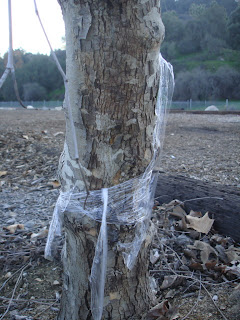 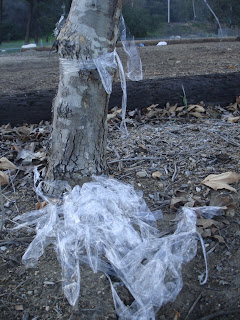 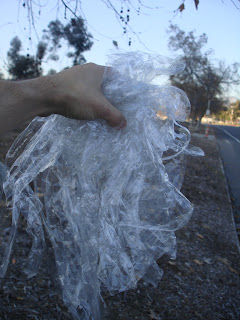 Unfortunately, it is abundantly clear that the City of Pasadena's "cleanup" protocol after major Rose Bowl events remains as inadequate as ever.  It is clear that city workers are not properly trained or not properly held accountable for protecting Pasadena's environment, and that the City of Pasadena itself remains a significant contributor to the ongoing degradation and plastic pollution of the Arroyo Seco.