It’s interesting how some things from your childhood can be viewed with entirely new eyes as an adult.  That’s been the case for me in rereading a book from my past entitled Tales of Mexican California. 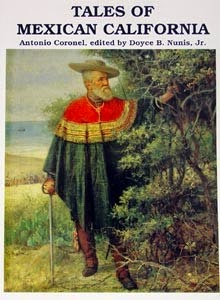 Tales of Mexican California is a firsthand account of the experiences of Antonio Coronel, a Californio who arrived in the Mexican territory as a youth in 1834.  Dictated in Spanish to an assistant of historian Hubert Howe Bancroft in 1877, it brings to life the people, places, and happenings of a bygone era.


When my dad first gave me this book as a young kid in grade school, he flipped through the pages with me and showed me the pictures.  “Look, chingasos!”  he said as he left me with the book, opened to a drawing of an early California brawl.  That piqued my interest enough to read of it what I could, and the illustrations were indeed suited to a young boy’s imagination.


Though I found the heritage of the Spanish-speaking peoples of this land interesting, and related to it as my own, it was not until recently that I discovered the reason it was so difficult for me to read the book beyond it’s pictures:  Despite it’s cartoonish illustrations, this is a legitamate historical account!  Hardly the stuff a child could comprehend.

What I find so fascinating about reading this book as an adult is that it all takes place in country I’m familiar with.  It’s a look back in time to the land I call home.  Coronel’s family home was Rancho Canada atras de Rancho los Verdugos - the modern day cities of La Canada and La Crescenta.  That’s right up the road from me - I went to high school in La Canada!

Who knew that there were battles against American invaders - right there in the Pueblo of Los Angeles?  Coronel gives an exciting account of this campaign, along with many other of his adventures up until the days of the Gold Rush an early California statehood.

“I knew the Sonoran desert well, and realized it was a risky move, because Flores did not have sufficient provisions.  Although my friends and I were well-provisioned and could share in a pinch, there wouldn’t be much to go around.  Many of the Californians gave me to understand that they were sure I would get them out of any trouble, with my knowledge of the country.  More than anything, this convinced me not to accompany Flores, although my men said they would follow me anywhere.


… I advised them that we should all turn back and wait the course of events in California, while hiding out in the sierra.  If we were pursued, we could still go to Sonora in time."

“… We went by the sierra of San Bernardino, walking all night…  We ran into a storm of snow, rain and wind so violent we couldn’t see each other.  The soldiers… scattered in the brush looking for shelter, covering their backs with saddle blankets…  Fortune helped with a lull in the storm, and I got a huge bonfire going…  When we were all together I told them these hardships were the beginning of the guerrilla life, or that of any wanderer of the sierras…  I proposed we go to the nearest ranch - Cucamonga - and find out what had happened while we were gone…"

Throughout his life, Coronel was a friend and advocate of the Indians and held several distinguished positions.  His account in Tales of Mexican California provides sections on life in the missions, and Californio daily life, culture and customs - including fandangoes, songs and dress - along with accounts of outlaws and banditos.


The very fact that these stories take place in such familiar environs to us residents of the Southland - including Rancho del Chino, San Diego, San Gabriel, Los Angeles and Ventura makes this a very exciting account indeed, and well worth a read for anyone looking to connect in a very human way to Southern California’s rich and fascinating past.