Arroyo Pollution and the RBOC

Yesterday, after finding the Central Arroyo to be riddled with plastic following Saturday's Walk for Autism event, I felt upset, frustrated and angry.  The Arroyo is polluted in this way all of the time, especially after events.   That is the reason I first expressed my desire to Tim Brick, Managing Director of the Arroyo Seco Foundation, to volunteer to help clean up the Arroyo.  It has since been my privilege to be able to help organize and lead regular cleanups for the ASF.

Something about finding all of that new pollution in the Rose Bowl yesterday spurred me into action yet again.  Maybe it was because for three days in a row before the Autism Walk, I had run around the 3.3 mile loop with my pup and picked up all of the trash I could find.  Nothing spoils the beauty of the Arroyo more than plastic trash, and I was feeling like maybe soon I would be able to enjoy a run around the Rose Bowl without having to pick up any of it.  After seeing my hours of hard work ruined, my mind was racing and trying to find a way, any way to put an end to this pollution!

I made some calls to the City, and learned that the Rose Bowl Operating Company was responsible for cleaning up after the event.  I got in contact with the RBOC Event Manager, Julie Benavidez, and expressed my concerns.  I asked if there had been a cleanup after the event, and she said that there had been.  I told her how I had just been down in the Arroyo, described the amount of pollution and expressed my frustration with the woefully inadequate cleanup efforts in the Arroyo following every single event.

We discussed possible ways such degradation of the Arroyo might be avoided in the future, and both agreed that it would be a good idea for the RBOC to work together with event organizers to do so.  I suggested utilizing those big water dispensers with spigots, rather than distributing single-use plastic bottles.  That way, people with reusable bottles could fill up, and paper cups could be used by everyone else, thus minimizing the impact on the environment if they should become litter.  Julie promised to talk to their client (the Autism Walk people) and to focus on better ways of preventing such a thing from happening again.  She mentioned that perhaps they could send a crew around the Rose Bowl loop on a weekly basis to clean, and she told me she would send a crew out that day to clean all of the litter left along the Walk for Autism route because "one person shouldn't have to clean it all."

Later on that day, I rode down Washington Blvd through the Arroyo, and found it to be riddled with plastic bottle caps in the same way as other parts of the Autism route.  "Well, I guess they haven't cleaned it up yet,"  I told myself.  Today I drove my car down there, parked and walked around.  I picked up several plastic bottle caps near the sewer drain on Washington Blvd, just east of West Dr.  I picked up several more in the mulch along the side of the road on West Drive, just south of Salvia Canyon.

I called Julie Benavidez again.  I asked if there had been a crew sent out along the route to clean it.  She said they sent out one guy, on some kinda cart they call a Toro cart, to clean the paved inside part of the 3.3 mile loop.  I told her of the bottle caps I had found along that paved area on Washington Blvd, but gave her the benefit of the doubt on those ones and suggested that they must then have been from last night's use.  I then reminded her that the entire road was closed off during the Autism Walk, and that even the trails were being used by the hundreds of participants.  I had noticed that the inner Rose Bowl loop appeared to be cleaner, but there were still bottle caps in the street, and likely throughout the mulch and along the trails.  They still hadn't done a proper job of cleaning up after their mess!  Julie said that she couldn't send anyone else out to clean it today, but that they would send people out yet again to inspect the mulch and other neglected areas.

I expressed my concern that the Arroyo is always neglected in such a way after events.  I told her that it appears as if the cleaning crews after an event throw the big stuff away, but all too often ignore the little stuff that is left all over.  All of these little pieces of trash and plastic may be harder to see from your car window, or may not seem like a big deal, but collectively they pose a major threat to the environment, and seriously degrade the Arroyo.  "How am I to know that going forward, this kind of neglect won't continue?"  I asked.

Ms. Benavidez said that going forward, the RBOC is going to have to employ more people to do a better job of cleaning up all of the trash left over in the Arroyo after events.  She said that they rely on volunteers from the events to do a lot of the cleaning, and that these volunteers may do an inadequate job of it.  That is why, she said, they will need to employ more people to clean, and to focus specifically on picking up all of the "little" trash as well as the more obvious stuff.

This has been an exhausting experience, but I just had to do something.  I made calls.  I wrote to the Pasadena Star News.  And I started this blog.  Only by doing things the right way and by correcting our mistakes are we civilized.  All that we accomplish as human beings is for naught if we live in a world full of plastic pollution.  How can we be proud of that?  All of the greatness and accomplishments, going back to the time of our ancestors, are worth nothing if this is where we end up -- in a once pristine and beautiful world that's become a giant plastic dump.

It is time that we reverse this trend, and stand up for the world which we deserve!  No one has the right to take that away from us.  I will wait for the next Rose Bowl event, and hope to see some changes for the better.  If the RBOC does a better job, then I will be the first to praise them.  And if the Arroyo continues down the path of degradation, I hope we will all be there together to defend it. 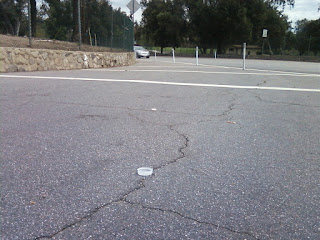 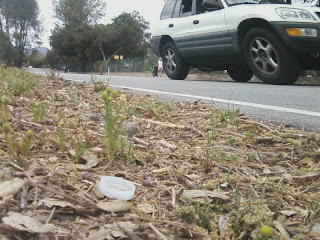 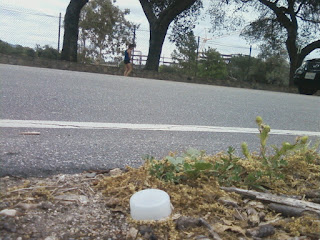 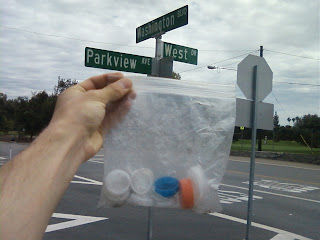